[…] One part of the history of tap-dancing is amply represented on DVD: the Hollywood part. It’s not just the classics of Fred Astaire and Gene Kelly. You can find obscure movies worth seeing only for cameos by the Nicholas Brothers or lesser-known hoofers, dancers who shuffled into the immortality of film back when tap was ubiquitous in American popular culture.

Of what happened after that — tap’s decline and revival — far, far less is available. But some of that gap has been filled with the recent and important release of a five-DVD set of live performance clips by the Jazz Tap Ensemble (jazztapensemble.org).

At its founding in 1979 in Southern California, the company was at the forefront of a generation of dancers who sought to take the branch of tap that developed with jazz and transfer it to the format of modern dance, with touring troupes and repertories of choreography. Some of that history is recounted on Disc 1, which, in focusing on early material, most strongly conveys both the excitement and the awkwardness of the enterprise. (The light touch and pixie charm of one founding member, Camden Richman, pops out.) But tap history speaks wordlessly throughout.

Lynn Dally, the company’s stalwart artistic director, made the selections, and her voice-over is mostly unobtrusive. Much of the video footage, shot from 1979 to 2012, is less than ideal in technical quality, and short excerpts turn sections of the discs into mere highlight reels. On the upside, splicing together performances of the same work across the years yields insights into the function of repertory and how different dancers can change a piece. The sound is good, and the close connections between dancers and musicians are always clear.

A salient feature of performances by this company and others like it was the regular inclusion of tap elders. Critics often noted how these seasoned guests tended to upstage the troupes that had invited them. Selflessly or inadvertently, these discs reproduce that pattern. On Disc 4, the Nicholas Brothers and the great Honi Coles, just by being themselves, though past their prime, outshine pale renditions of Hollywood numbers by younger company members. 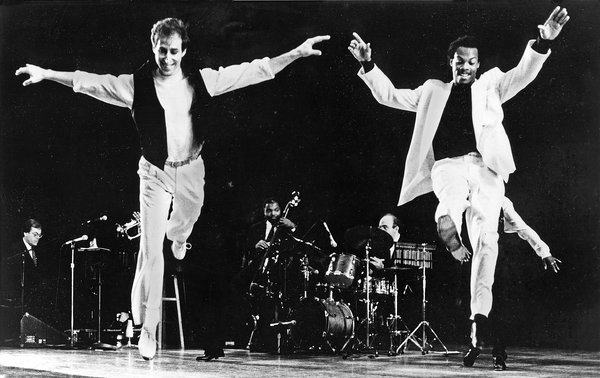 Disc 3 contains gorgeous performances by the West Coast master Eddie Brown and the incomparable Jimmy Slyde. Both, impossibly cool while complexly swinging, are captured here in a late-but-still-great stage touched by the miraculous.

The disc is also notable for the group compositions they created with, and for, the ensemble. Other examples of this genre — collective choreography drawn from a soloist accustomed to ad-libbing — are underwhelming, but Slyde’s “Interplay” finds a rare balance between set structure and prompts for individualizing improvisation.

It’s not all about the departed. There are younger dazzlers: Sam Weber, a mild-mannered virtuoso whose artistry required a concert stage; eye-and-earcatching apprentices (Dormeshia Sumbry-Edwards, Derick K. Grant and Michelle Dorrance, among others) who have since become leaders. Yet Disc 5 is bittersweet, with a mini-documentary about Gregory Hines, who died in 2003 at 57. His modernizing musicality, his in-the-moment openness, his irreplaceable charisma — this footage shows why the live performances of this movie star were so life-enhancing. Thankfully, Jazz Tap Ensemble has preserved some of that on disc.